A while ago, I purchased from Glass-Ware.com an Aikido Cathode Follower 2 (ACF-2) All-in-One 9-Pin PCB, designed by John Broskie, the editor of Tube Cad Journal (tubecad.com).

The PCB holds a pair of cathode followers, each loaded by a triode current source, and a respective power supply. In my build, a JJ E88CC with 220ohm cathode resistors shows 0.003% THD @1kHz 1Vrms with pure 2nd harmonic distortion.

A careful look at the schematic (below), confirmed by some Spice simulation, revealed that the "Aikido" in the ACF-2 relies on the exact match of the voltages across the capacitors C18 and C19, including the hum component. These capacitors are in series for the rectifier (e.g. hum) current and, together with R4/R7, are in parallel for the signal current. In the ideal Aikido world, the hum voltage across C18 would cancel that across C19, providing hum-free signal output. 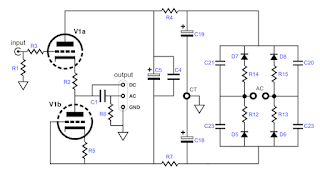 In reality, ACF-2 provides no rejection of the hum caused by the mismatch of the AC components of B+ vs. B-. A mismatch is easily created by e.g. C18 and C19 having slightly different capacitance. Mismatched electrolytic capacitors are common - they usually have 20% tolerance, and the capacitance changes with time and temperature, so an ideal match never happens.

My SPICE model shows that a 1% mismatch between C18 and C19 would produce about 3.5mV of imbalance in the 120Hz components between the positive and negative rails. In ACF-2, 50% of that imbalance goes to the output - that’s 1.75mV of hum not cancelled by Aikido - and can be easily audible. Larger mismatch would produce more hum.

One solution (see the schematic below) would be to split C4 into two capacitors, one connected between B+ and the ground, the other between B- and ground - see the attached schematic. That wouldn't eliminate any mismatch but would make it less relevant, as there would be a lower impedance path for the signal current to ground from the anode of U1a (U2a) and the bottom end of R5. The PCB is not designed for this, unfortunately, but one can place two radial capacitors in the space allocated for C4, connecting them to C4 pads and to the ground pad nearby. I ended up installing 2x 470uF 200V caps in each channel and leaving in place C5. This reduced the hum from 0.15% to ~0.001%. 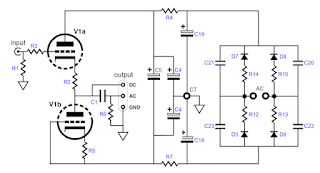 Another solution was suggested by John Broskie himself, and that is to replace R12 to R15 with jumper wires and then place a 100 to 1k ohms resistor in series with the secondary center-tap and the PCB's ground pad. Better still would be to use a choke in place of the series resistor. This would create an RC (LC with the choke) filter with that series resistor/choke and C18/C19. The two solutions are not mutually exclusive and can be used together for even better results.

Note: the attached schematic was designed by John Broskie and published in his Tube CAD Journal. John is the author; I just built his design. I reproduced the original schematic to illustrate the post above.
Posted by Alex at 10:41 AM